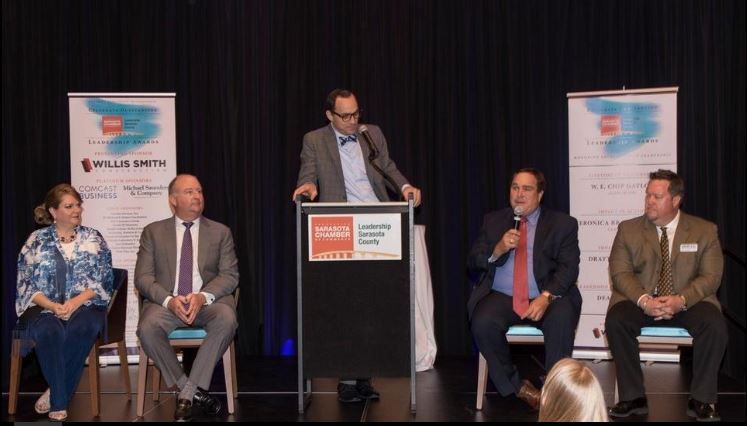 Guests were welcomed by Monica Van Buskirk (class of 2003), John LaCivita (class of 2004) and Stacy Dillard-Spahn (class of 2010), chair of the leadership council. Leadership Sarasota does two unique things, she said. It creates personal and professional bonds that last a lifetime and gives graduates a wealth of information about leadership and about Sarasota County. “It creates a community of leaders who will strengthen our community as a whole,” she said.

Following lunch, Kevin Cooper (class of 2014) and president of the Sarasota Chamber, spoke to the honorees in a wide-ranging panel discussion, that covered their careers, leadership, mentoring and much more.
Chip Gaylor, who received the lifetime of leadership award, is a partner in the law firm Muirhead, Gaylor, Steves & Waskom P.A. He spoke about the importance of listening. “Sit back and listen, listen, listen. Then when you do speak people will listen to you,” he said.
Veronica Brandon Miller, vice president of Goodwill Manasota’s Foundation, received the impact in action award. “A title does not make a person. Just because you don’t have a title doesn’t mean you can’t have an impact,” she said.
Drayton Saunders, president of Michael Saunders & Company, also received the impact in action award. Asked how he decides what causes to become involved with, he said, “I go back to something I learned from my mom: Don’t do something you are not passionate about.“
Dean Crowley, who received the dedication award, founded Crowley Services following 19 years with W.G. Mills. He noted that “Community immersion arms you with a better perspective of where the needs are in the community.“